We have to admit, Vanhee has always been a leading name in national pigeon racing. Over the years, father Gerard and his son Michel Vanhee have had a proven record of success. Today, daughter and granddaughter Annemie continues the success stories of Vanhee. 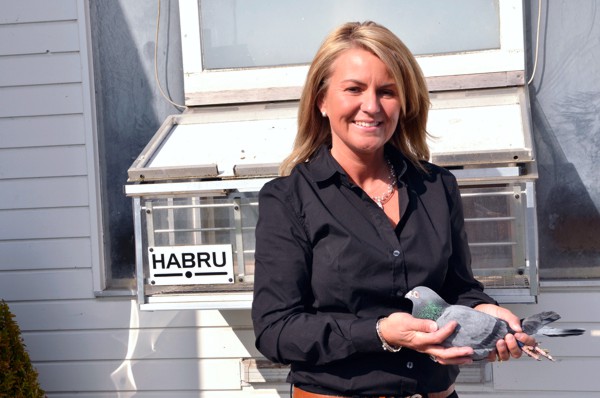 It is hard to ignore the extensive list of achievements of the Vanhee family from Wervik, which allows them to play a key role both at the national and international middle distance. Taking a look at the numerous top-results at the Ten Brielensteenweg in Wervik, we came to the following summary, a spectacular number of victories over a period of almost 80 years and over three generations of top-class sport:

To this day, the Vanhee-pigeons keep their place at the top of international racing, simply because numerous other lofts have been making considerable progress thanks to the Vanhee pigeons. At national level for instance: the family Norman, the family Gyselbrecht, loft A.D.L. Derweduwen, Roger Florizoone, Guido Vandenbulcke, Luc Vancoppenolle, Jef Deridder, Eric Limbourg, just to name a few. But also at international level: Bucher (Switserland), Günter Nies, Peter Grup and Peter Trost (Germany), superstar Marcel Braakhuis and Wilfried Stiel (The Netherlands), whose ‘Lana’ has won ‘Best international Barcelona pigeon 2007’ for the Netherlands over five years Barcelona, and whose ‘Leonardo’ won 1° national ace pigeon Perpignan 2003-2007 (over five years’ time), etc. These lofts all owe many of their successes to the Vanhee stock. And one of the most renowned and well-known breeding lines of today, the “Dream Couple” De Rauw-Sablon, has some Vanhee-origins as well, namely the golden ‘Motta’-line. The ‘Albert’ (the cock of the ‘Dream Couple’) is the result of inbred of the famous ace pigeon ‘Deridder’ (2 times 1° Prov Ace pigeon middle distance), whose pedigree two times includes the ‘Geschelpte Brive 819/78’. And he was in his turn bred from the ‘Motta Vanhee’ of Roger Florizoone! This also links to the Vanhee-origins at the lofts of both the late Jef Deridder and the late Roger Florizoone, who have both been able to reach the international top at the middle distance thanks to Vanhee. There is also Erik Limbourg, who won national victories in 1991 with 1° and 2° National ace pigeon middle distance KDB, which his strain mother ‘Vaal Motta 157/83 (directly from the ‘Motta’-line Jef Deridder) had a great share in. And she later became grandmother of the renowned ‘Golden Pair’ from Limbourg! This demonstrates the considerable impact of Vanhee pigeons on international pigeon racing, obviously not only for Gerard and Michel Vanhee, but also for all the lofts mentioned above... even to this day!

Some of the current success can be found with (grand)daughter Annemie, who plays under the name of A&M to honour her father. She represent the third generation of the Vanhee family. However, her loft could best be described as a colony in the making, with obvious Vanhee-origins. Father Michel and grandfather Gerard created a colony based on true winners and ace pigeons. Initially, Gerard used to cross top-pigeons most of the time, whereas his son Michel later tried to really embed the features of their pigeons into the stem through inbred and line breeding (turning super cracks into super breeders). We have witnessed this in various loft reports and in the pedigrees of several ace pigeons. The characteristics of their pigeons are always there, sometimes skipping a generation, but then coming to the surface again in the following generation. When both grandfather Gerard and father Michel deceased after a car-crash in 1998, Annemie decided to take over their work, continuing the legacy of Vanhee pigeons. Before the auctioning of all the Vanhee-pigeons in 1999, Annemie managed to breed a round of late youngsters, which then provided a basis for her own stem. That way, she was able to save some of the valuable heritage. She obtained descendants from some of the best top lines, such as ‘Atoom’, (winner of 1° Nat. Mimoges), ‘Motta’ (a top flyer and super breeder), ‘Patrick’, (golden medal at Olympiade Katowice), ‘Napoleon’ (1° Intern. Narbonne) and the old ‘Janssen’-line (line ‘Tobias’: 2° Nat. La Souterraine). Meanwhile, her own stem lines were reinforced with pigeons with Florizoone-origins (for instance the ‘Freddy’-line, with clear Vanhee-origins), which proved to be an instant success! More recently, some new blood lines were introduced, such as Marcel Aelbrecht, De Rauw-Sablon (grandchild Freddy – inbred Freddy), Etienne Meirlaen, Xavier and Raoul Verstraete (a son of Xtra 1° national Cahors 2008 and a hen from the provincial ace pigeon 2011 Magic Ace), B. De Ceuninck (Koopman x Prange, Silver Shadow), Stefan Steenbergen (Zoon Iron Man). Some fresh lines that are to be crossed with the inhouse stem.

Annemie sought and found her place in pigeon racing, and she proved that she is a competent fancier. She actually started in 2001 with the young pigeons. It is of course time-consuming to build up a middle distance-colony from zero, and yet, Annemie already impressed at the middle distance and even the heavy middle distance, not the easiest of disciplines in pigeon racing... This became clear to her in the past seasons: in a number of very difficult races, all of her middle distance racers had their share of bad luck. But fanciers can always put this in a perspective, and so, she did not get deceived by a number of hard races.

She actually finished the season with a number of victories and ace pigeons: